Chess is a complex game. You might think chess experts would take some time to come to a decision. First of all, they must study and make a careful analysis of the board. Next, they have to consider all the possible moves available and weigh up all of the possible counter-moves by their opponent. Then, by a process of logical deduction, they select the best move to make. But, if you watch a chess Master at work, particularly if they are playing an exhibition tournament against a large number of lesser players, you will see they move very quickly, often seeming to assess the board and make their choice in a matter of seconds. Watch a Chess Master at work and it almost looks at though the Master isn’t thinking at all!

How does this happen? And what can we learn from chess that might help us improve the speed and quality of own decision-making? 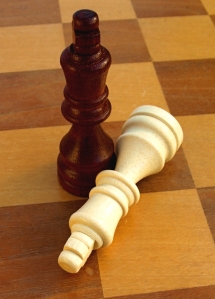 Let’s look at how chess players use their knowledge of chess during a match.

During a game, experienced chess players aren’t looking at the board as if it was something completely new and unique. No. They are looking for familiar patterns.

The first pattern they look for is the pattern made by the chess pieces: the position of the pieces on the board and their relationship to each other. I will call this ‘situation-pattern’ recognition.

“When the move is made in the mind’s eye — that is, when the internal representation of the position is updated — the result is then passed back through the pattern perception system and new patterns are perceived. The patterns in turn will suggest new moves, and the search continues.”
(Chase & Simon, 1973).

Maybe that is how a novice chess player makes a decision, taking ages to ponder all the different patterns in their mind’s eye. But expert chess players make their decisions fairly quickly. For an experienced player, I believe their second pattern seeking task is far more complex than a simple review of the next layer of patterns down a decision-making tree. Experienced chess players will be remembering when a similar situation-pattern was encountered and what happened next. I will call this ‘option-pattern’ recognition.

So, experienced chess players appear to make their decisions in two stages:

So a crucial skill for a good chess player is the ability to see and recognise patterns. And in order to recognise a pattern, they need to have encountered a similar pattern before. Since there are an awful lot of patterns that can occur on a chess board, this means a good chess player has a lot of work to do stacking up a store of patterns in their memory, to draw on in future games.

How do chess players build their memory store of patterns?

Why is this second method so important? By studying the past games of Masters and Grandmasters, a chess player will increase the number of patterns stored in their memory depository, just as they do through playing real games. But importantly, by observing the decisions a chess Master makes, the chess player will end up with a set of high-quality patterns. And, developing a range of high-quality ‘option-pattern’ memories is what makes all the difference.

In order to become good at chess, therefore, players need to be able to access two types of memories. Situation-patterns and option-patterns. And to improve, a chess player needs to practise regularly and (more importantly) study the games of better players.

Lessons we can learn from chess experts

We may not be chess players and we may know nothing about the game of chess. But we can take these principles and apply them to any skill we are trying to learn; for example, learning a new sport (tennis, golf, cycling) or a new skill (writing, cooking, woodworking).

A repository of thoughts on memory and other stuff.